Every June, Rotterdam Architecture Month celebrates the diverse and unique architecture of the city. We are pleased to join the month’s festivities by launching an exciting new publication and opening our office to visitors. Scroll down for more information! 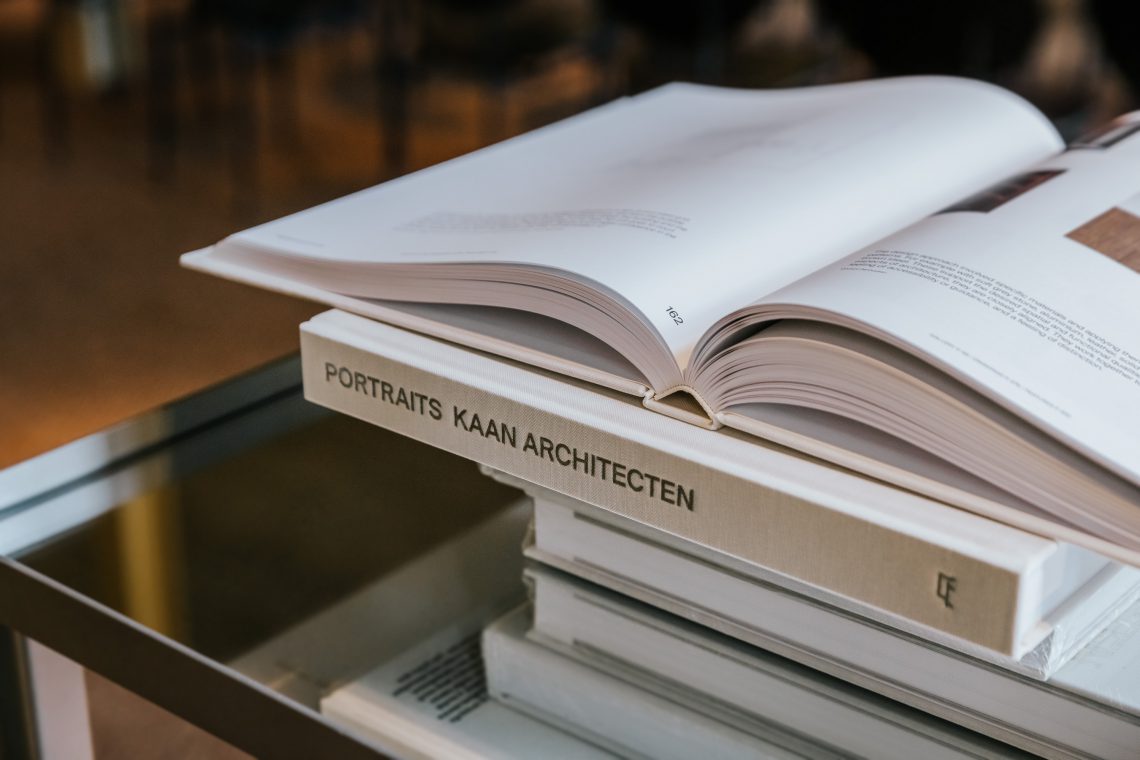 On June 21, we will present ‘Portraits‘, the first monograph on KAAN Architecten, recently published by Park Books. This is the first substantial publication offering a unique perspective on our major built works to date. The selected projects are portrayed as different characters with distinctive physiognomies but belonging to the same family and sharing similar features, hence the book’s title. Beyond being a project overview, ‘Portraits’ is a culmination of a research process aimed at interpreting a complex genealogy that reveals the fifteen buildings not as autonomous entities but as parts of a shared vision.

Join us on Tuesday evening, June 21, in a festive ceremony with a brief introduction by the authors and editors. The book will also be available for purchase during the event, courtesy of NAI Booksellers. The launch will take place at Baanhof, a unique and quirky venue located in a mid-century power station in the heart of Rotterdam. Spaces are limited, so get your tickets here!

We are also joining the Open Office Day initiative during the Rotterdam Architecture Month. On Saturday, June 25, we will open the doors of our office space located in the former premises of De Nederlandsche Bank. Come learn about the history of the mid-century landmark as well as about our work and projects. Guided tours in English will occur hourly, between 11.00 and 16.00 (the last visit starts at 15:00). Entry is free with registration. Book your time slot at the ticket link.

Opbouwdag (Construction Day) is a traditional Rotterdam event marked on and around 18 May that celebrates the (re)construction of the city after the Second World War. On that day, just days after the devastating bombing, city architect Willem Gerrit Witteveen was commissioned to develop a plan for a whole new city centre. The day offers an opportunity to look both back and forward to the ever-evolving image of the city. It highlights the importance of heritage, as well as sustainable city planning. 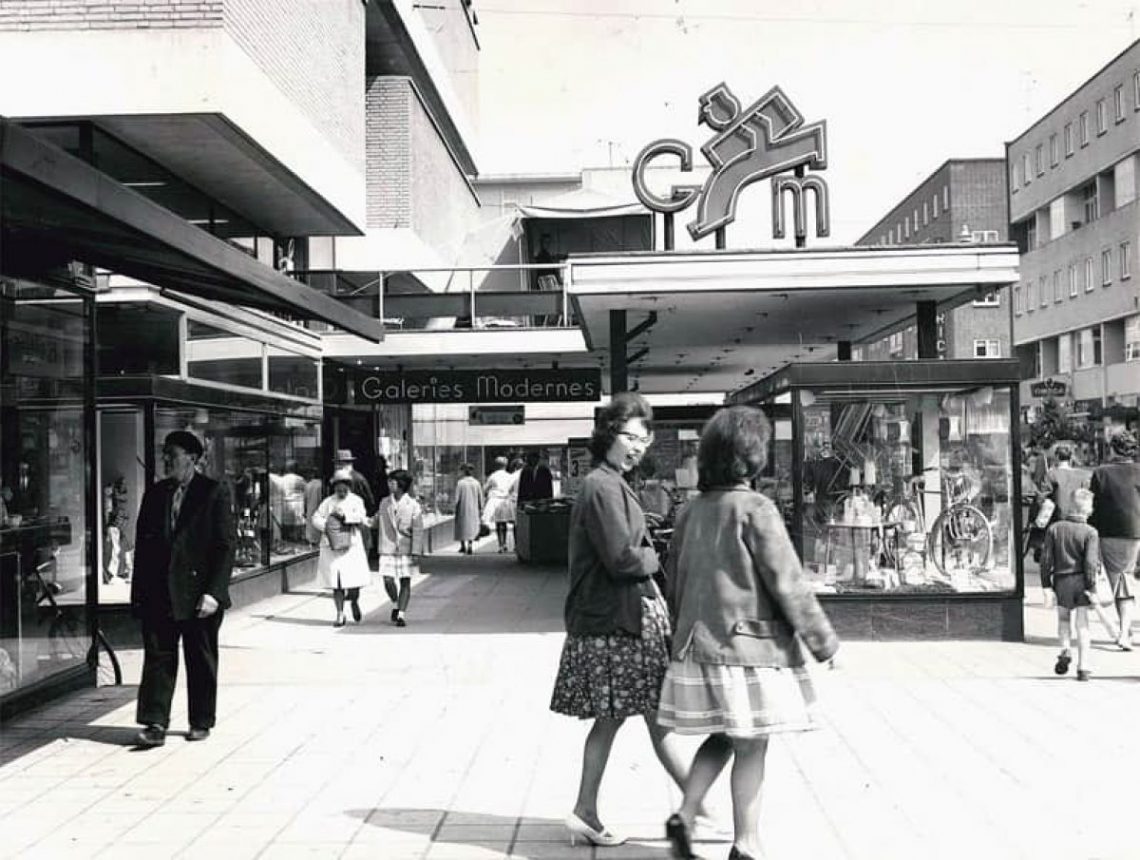 The Reconstruction era was an extremely fruitful period which yielded the city’s many landmarks. As a Rotterdam based studio, we are honoured to have contributed to several of them through renovations, extensions and retrofitting assignments. We dug into our archive to bring you a selected overview below! 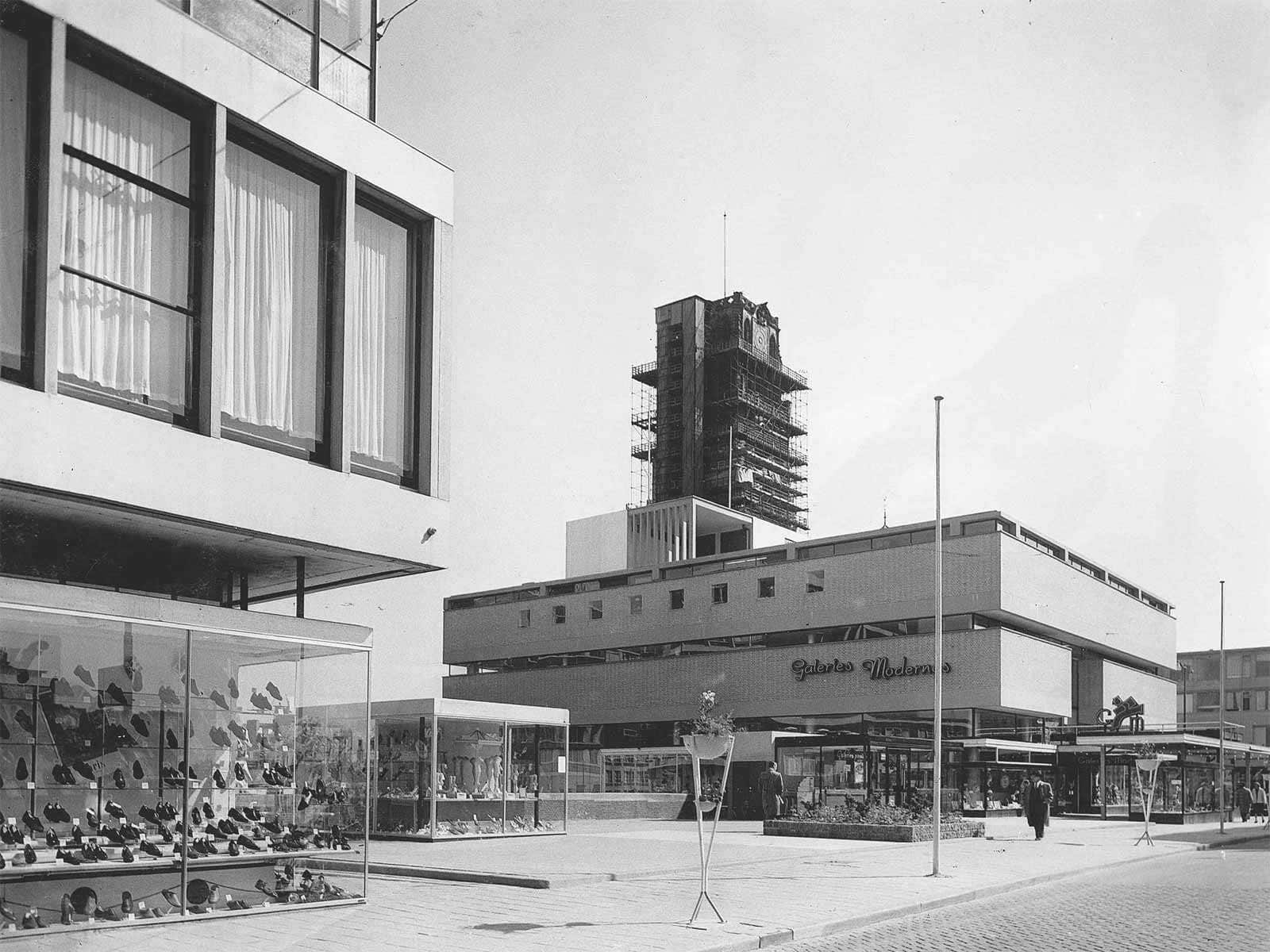 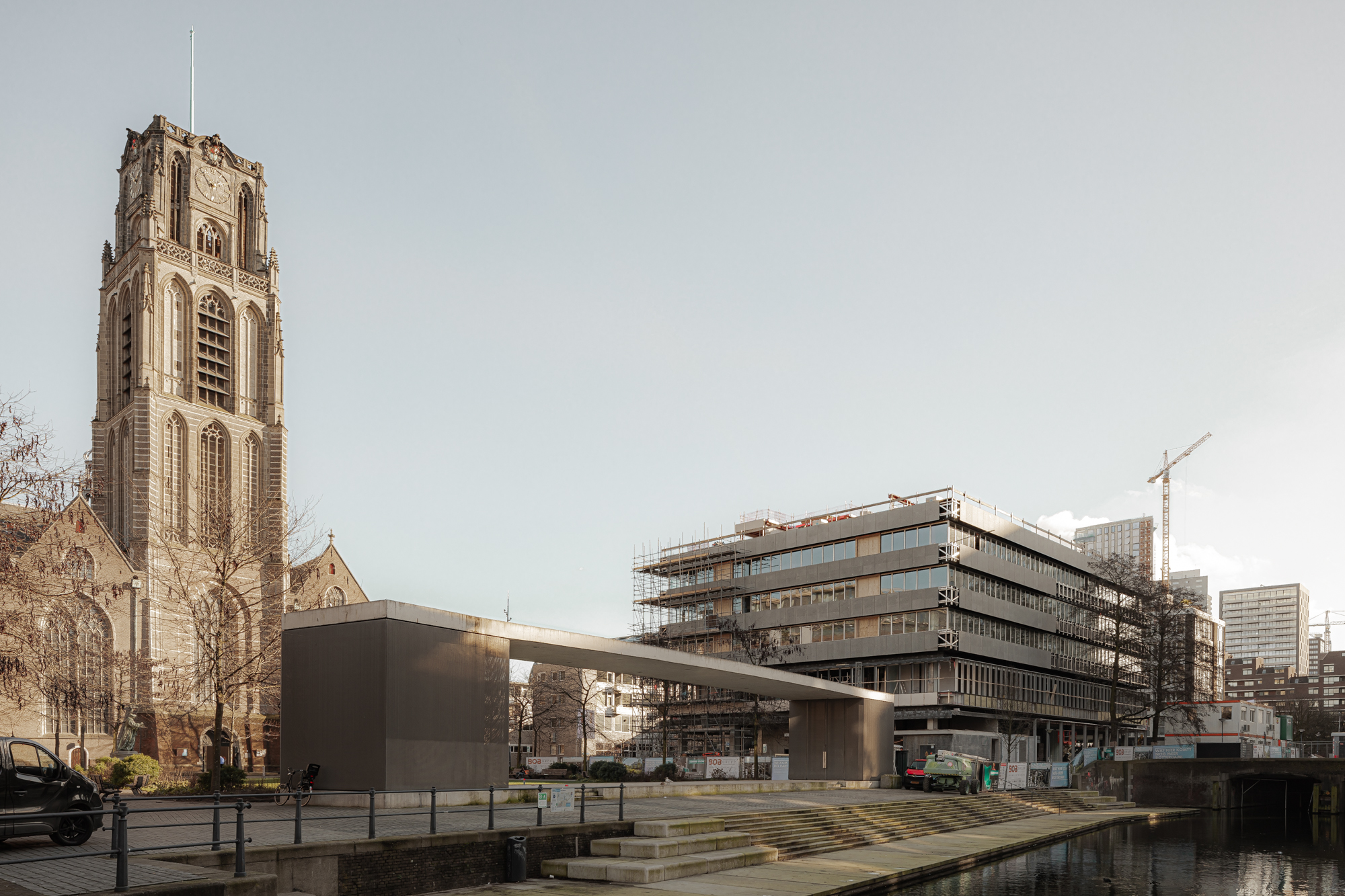 Originally built in 1957 in central Rotterdam by renowned architects Van den Broek en Bakema, Galeries Modernes was a prime example of the Reconstruction era architecture of the city. Our new proposal refers to and respects the basic architectonic principles of the original design. Strong volumes with deep setbacks in a primarily horizontal composition and sharp canopies are original qualities that are reinterpreted and translated into a contemporary building. 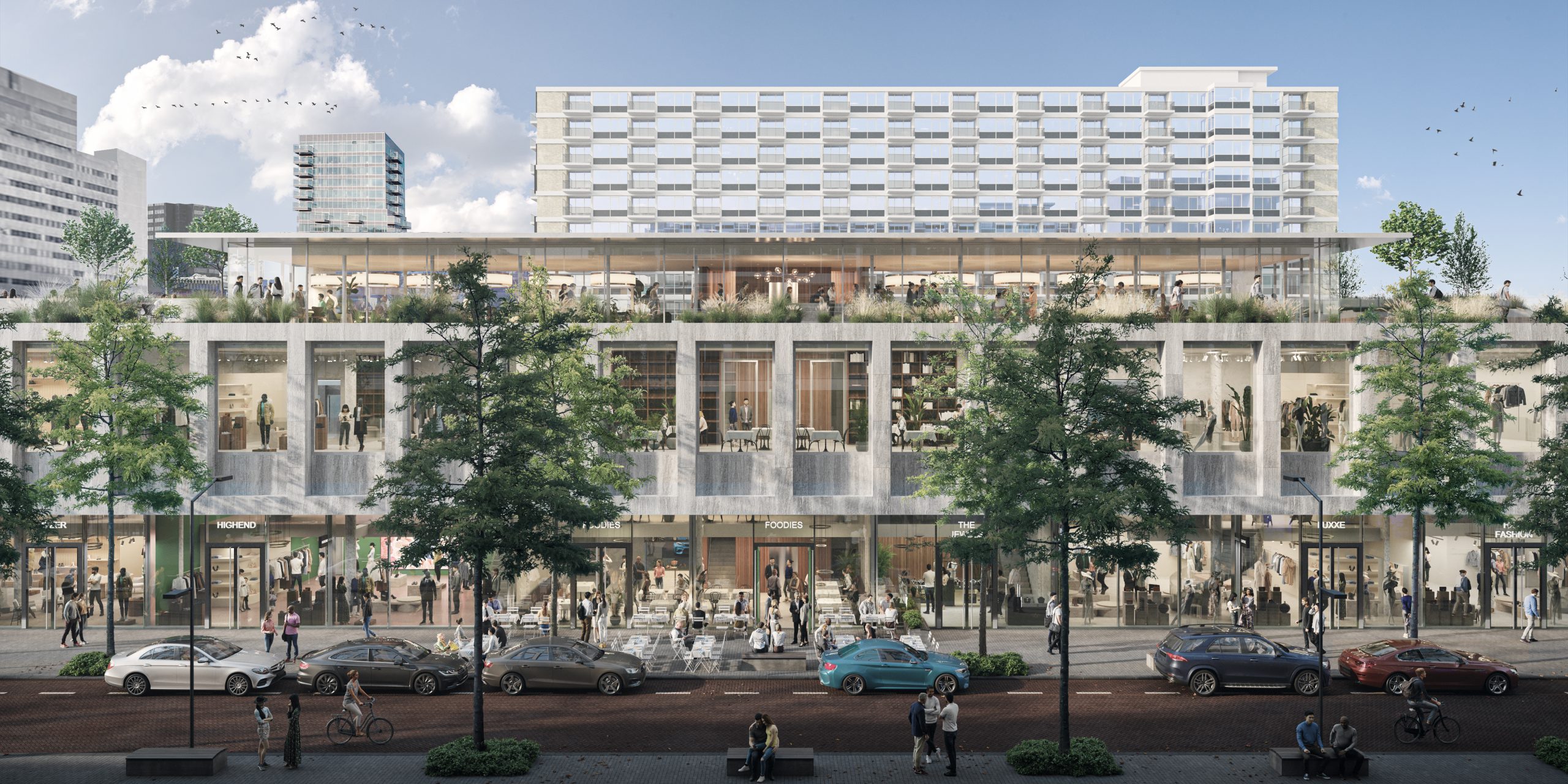 The Lobby is a sustainable transformation of the current commercial venue Crystal House located in central Rotterdam. Although a part of the historic Lijnbaan ensemble, the building is not a protected monument because it was built later. As a part of the ongoing urban regeneration of the surrounding area, this outdated structure is getting a complete overhaul based on transparency, accessibility and a lively program. The modernist redesign of Crystal House gives the nod to the Rotterdam Reconstruction era yet radiates individuality simultaneously. 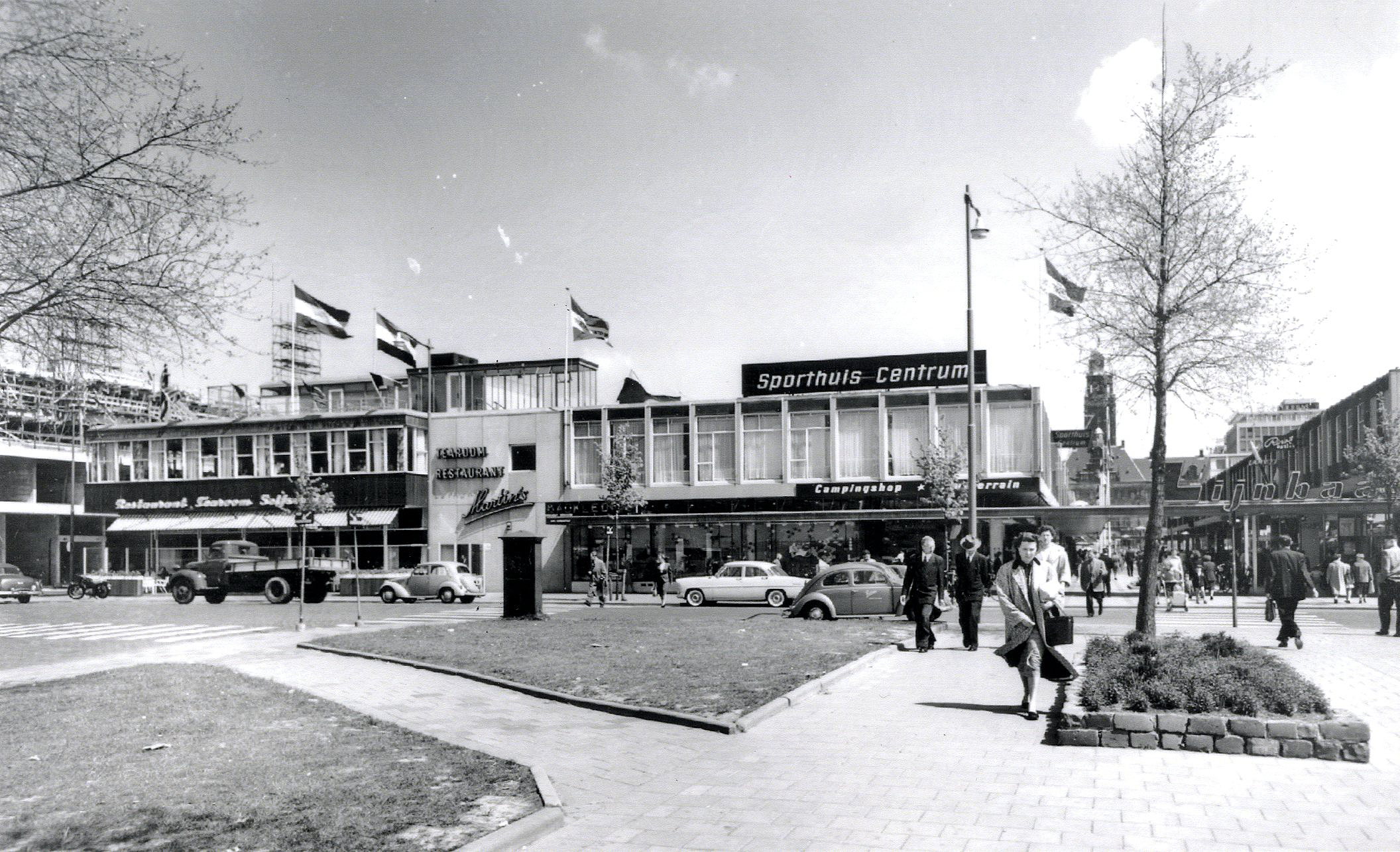 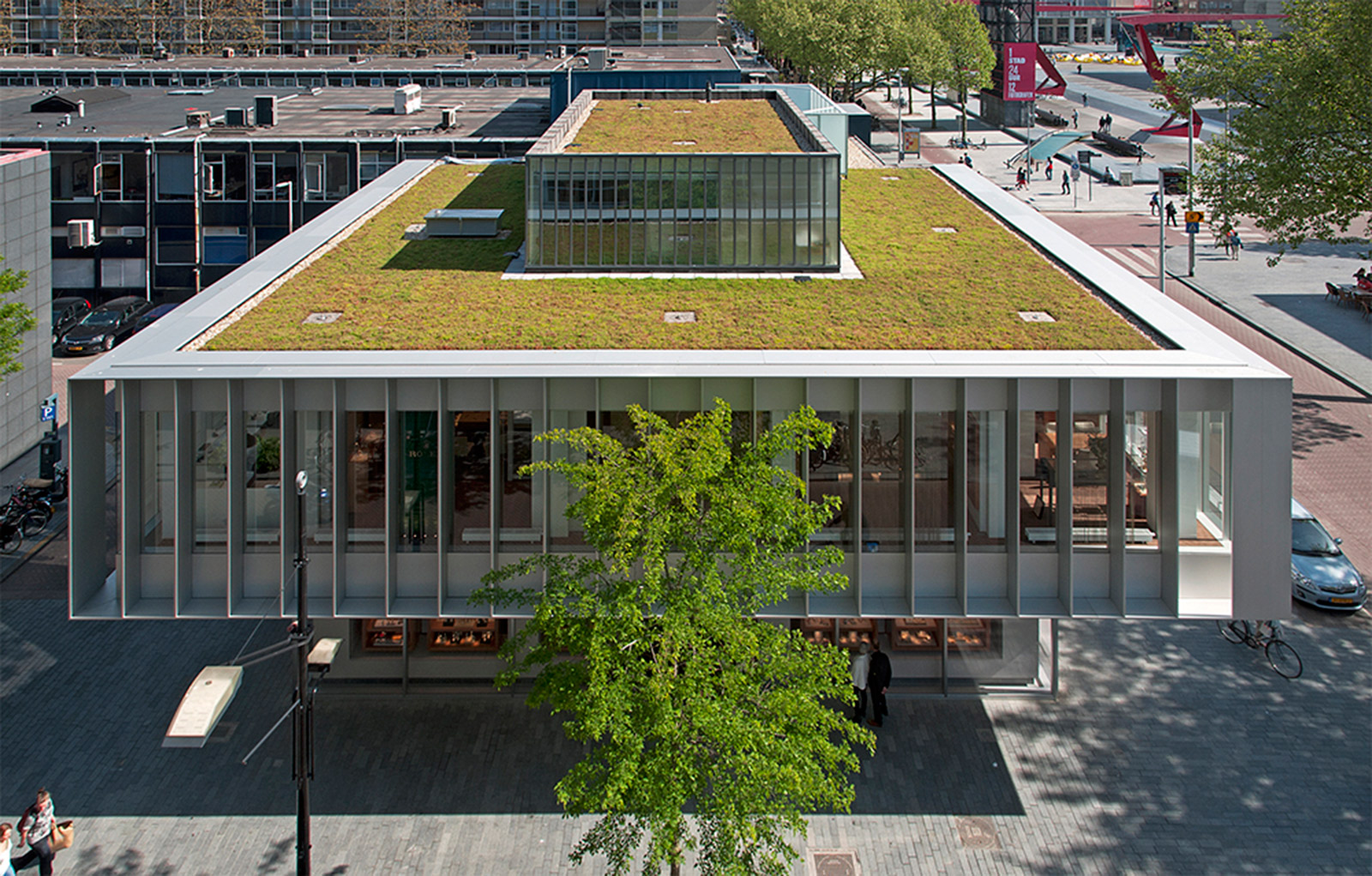 In 2013 we have renovated Dreamhouse, one of the monumental buildings by Van den Broek en Bakema from the 1950s in Rotterdam’s Lijnbaan area. While maintaining the existing concrete structure, rectangular volumes have been stacked in balanced proportions and masses similar to the original plan. They display a subtle differentiation of materials, window openings, colours and details, giving a contemporary feel to the traditional post-war architectural identity of Lijnbaan. 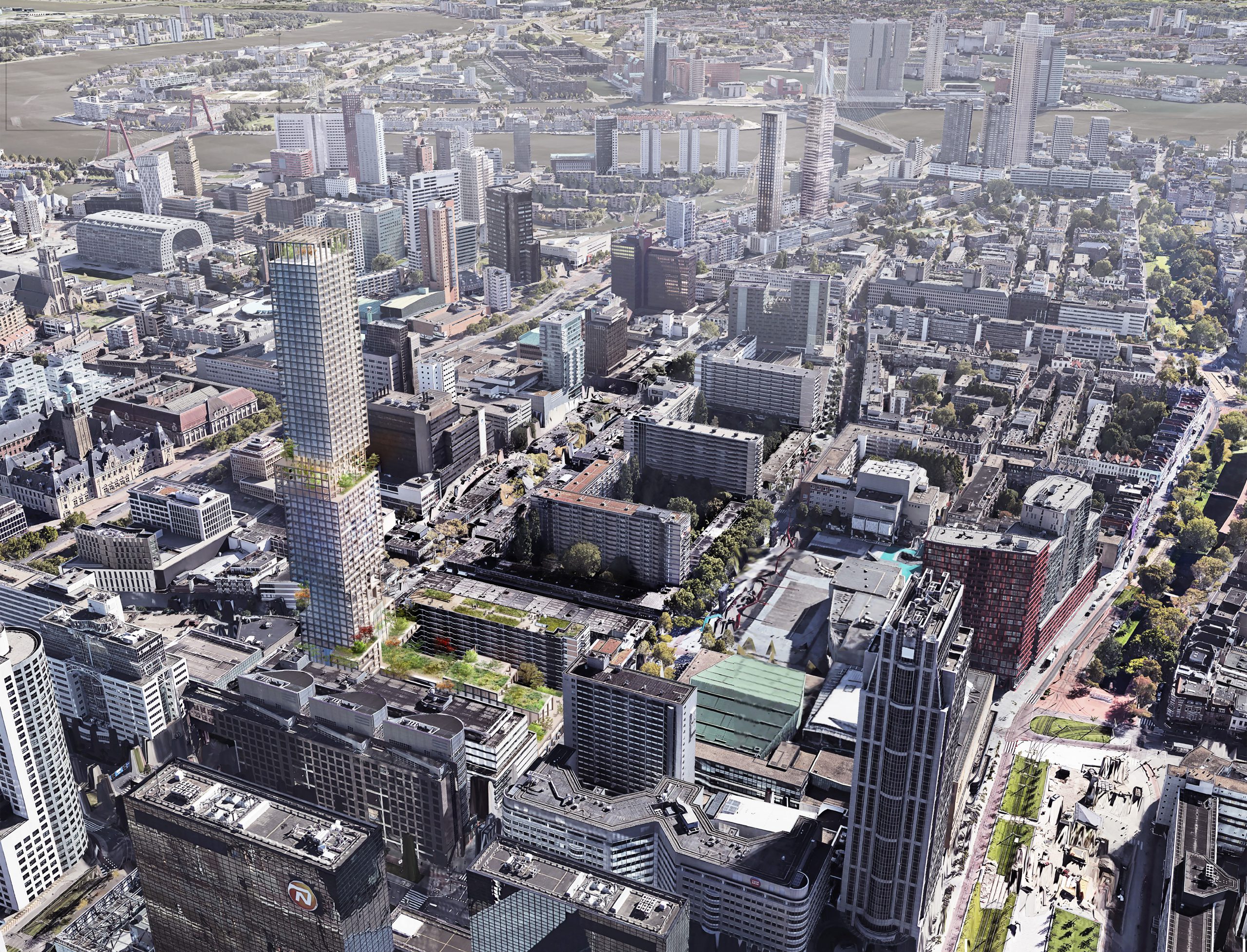 We are currently finishing the preliminary design for Lumière, a highrise project adjacent to the protected Lijnbaan ensemble that makes significant steps in the development and desired densification of the city centre and brings to it a qualitative programmatic diversity in line with Rotterdam’s metropolitan ambition. 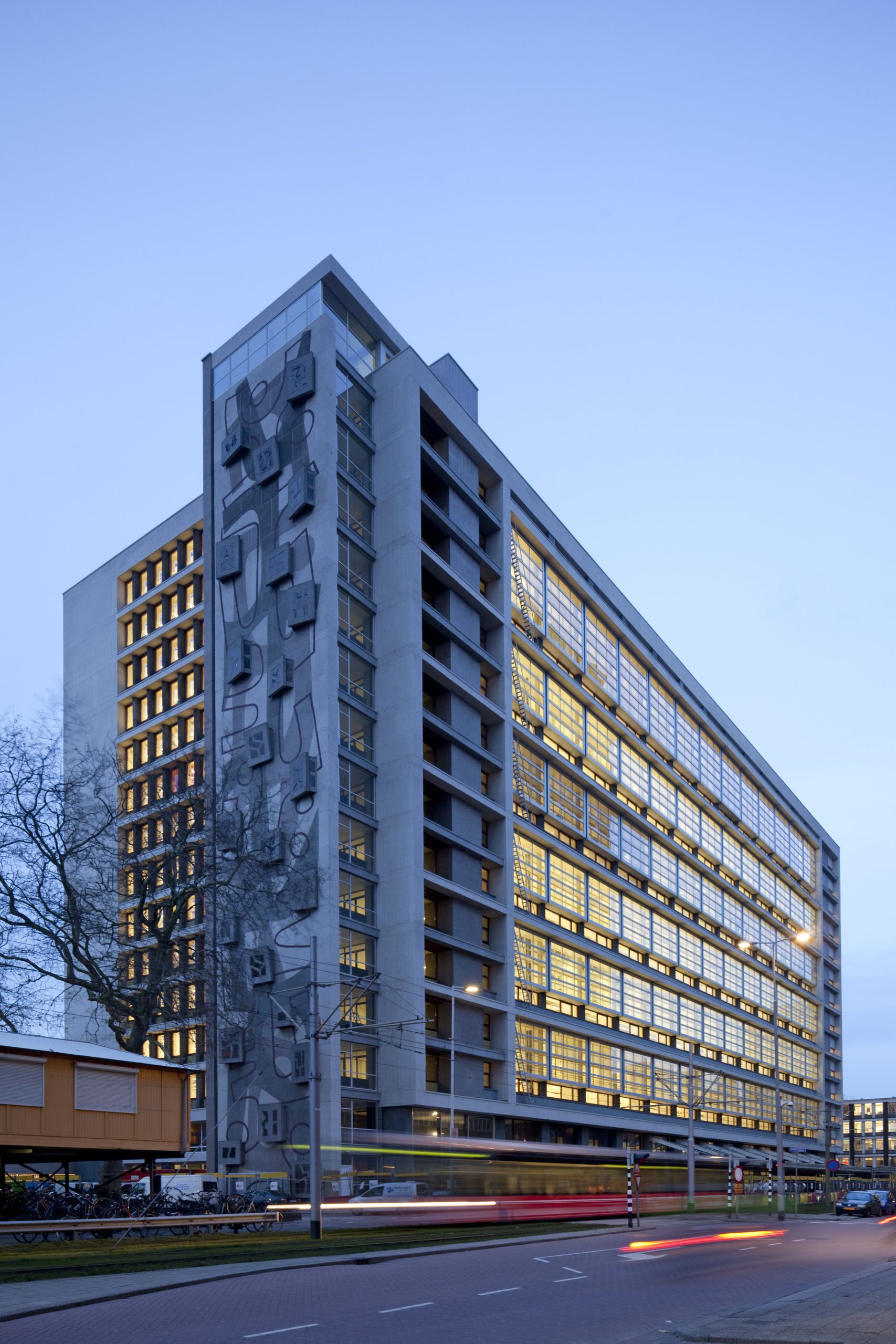 Central Post is a listed national monument that we transformed into a contemporary and multifunctional office building in 2009. A 90% increase in floor area was achieved through exterior restoration and interior transformation, and the building was granted a Class A Energy Label. The original Louis van Roode art piece on its façade and other integrated art pieces were also restored. 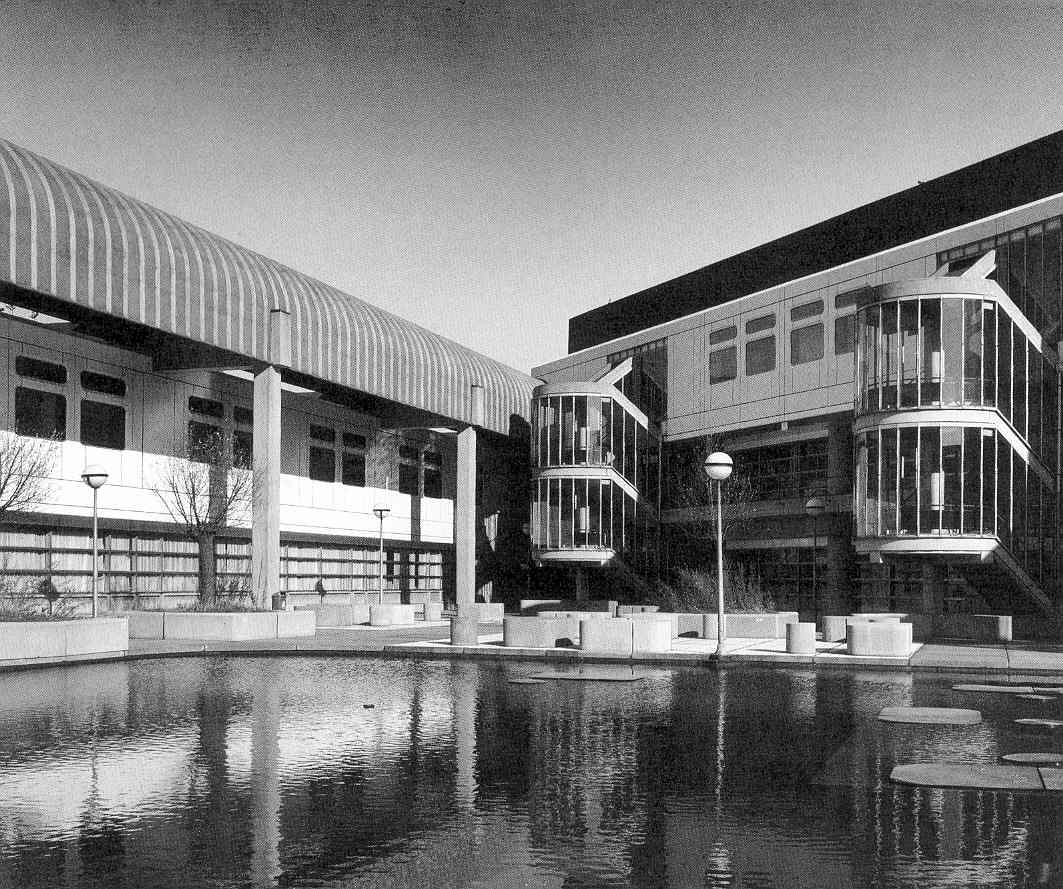 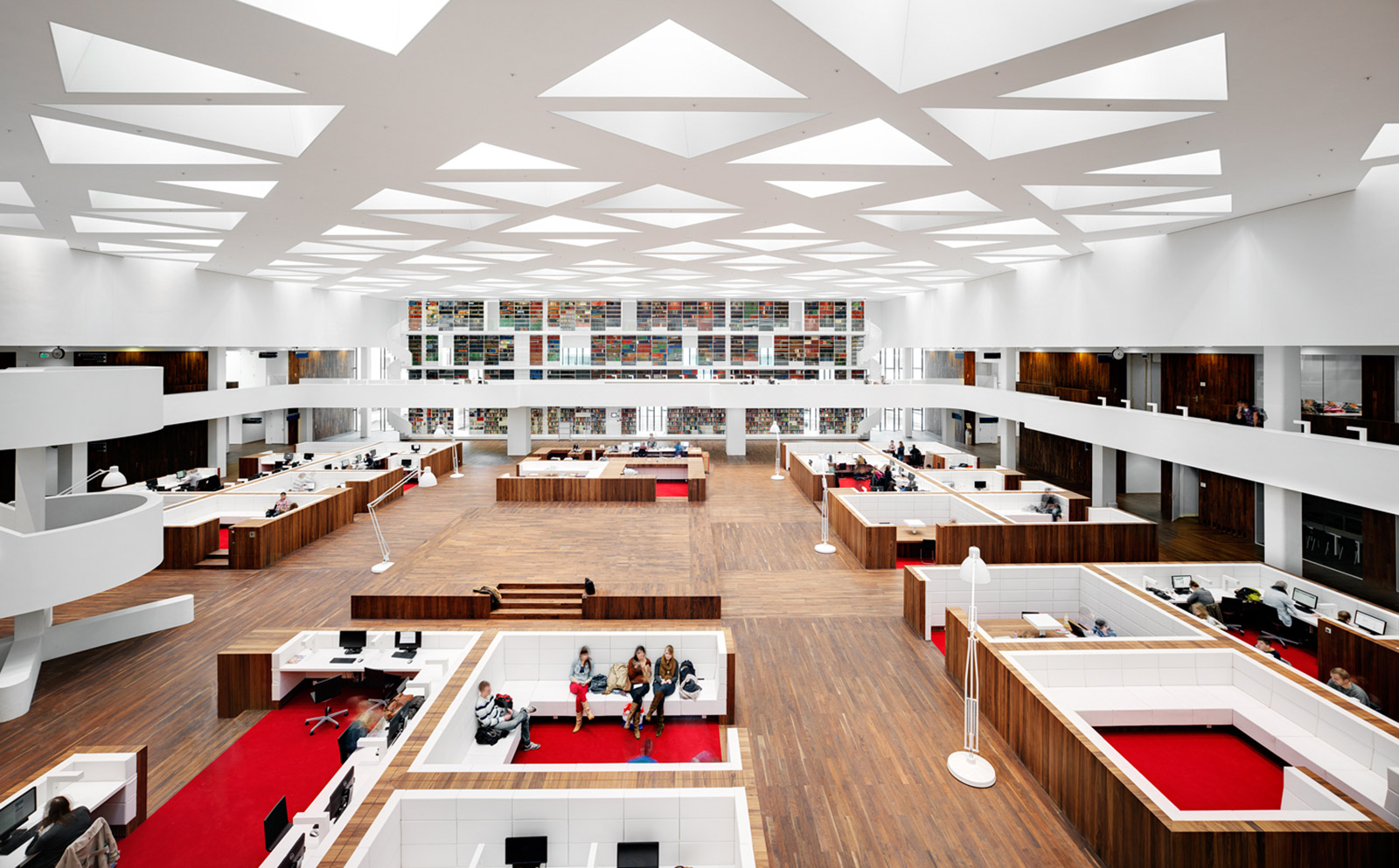 The Education Center is part of the Rotterdam academic hospital Erasmus MC, originally designed in 1965 by Arie Hagoort (OD205) in collaboration with Jean Prouvé. A neglected paved courtyard and an existing low-rise building have been converted into a much-used atrium that connects various new educational spaces. 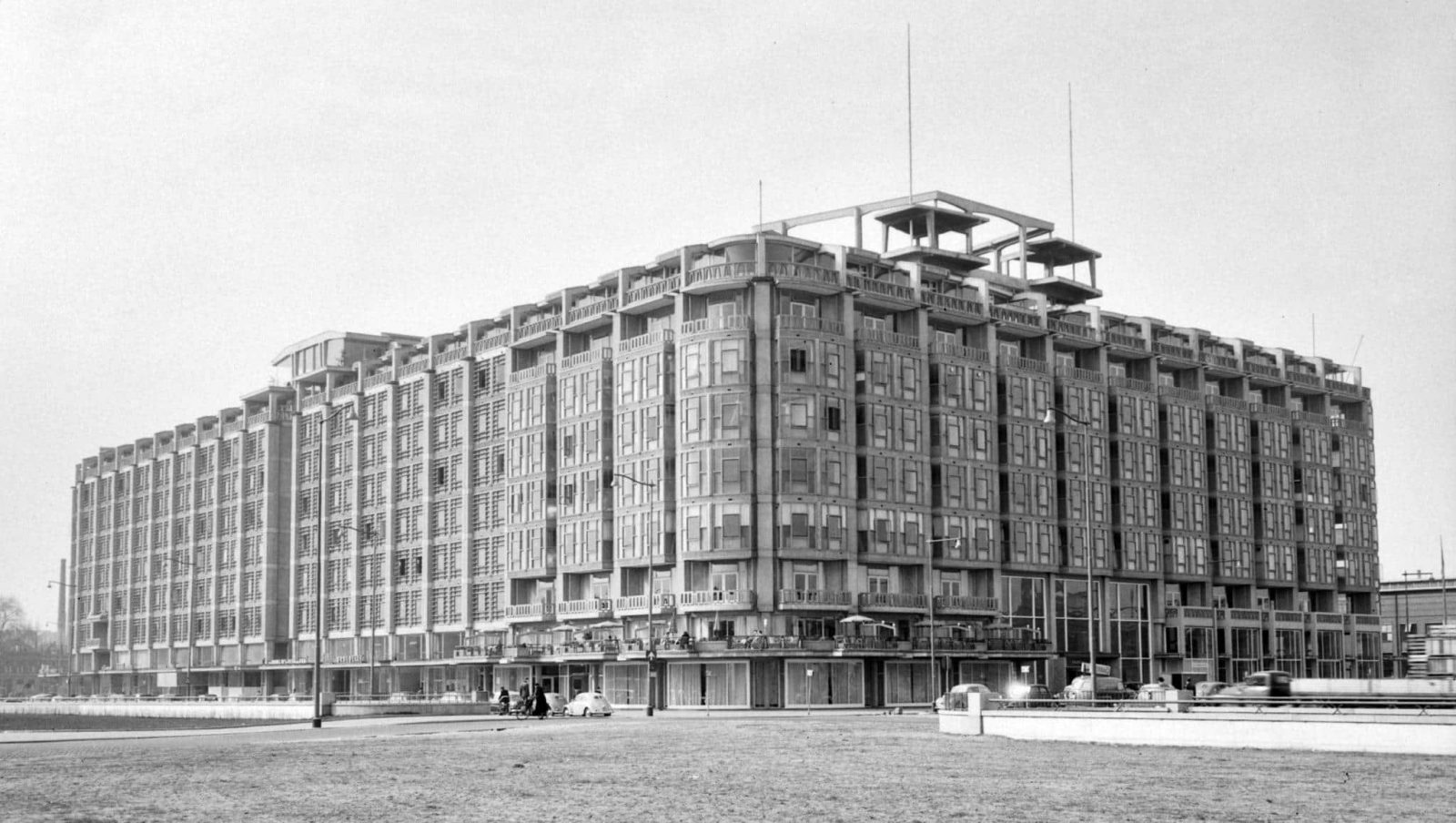 Recently, we have been collaborating on several projects with the Groot Handelsgebouw (GHG), the icon of the 1950s reconstruction. GHG is located in the centre of Rotterdam, right next to the city’s Central Station.

We are participating in the L’Architecture Manifeste exhibition in Rennes organised by the French association La Plateforme and École Nationale Supérieure d’Architecture de Bretagne from 17 May to 10 June 2022. 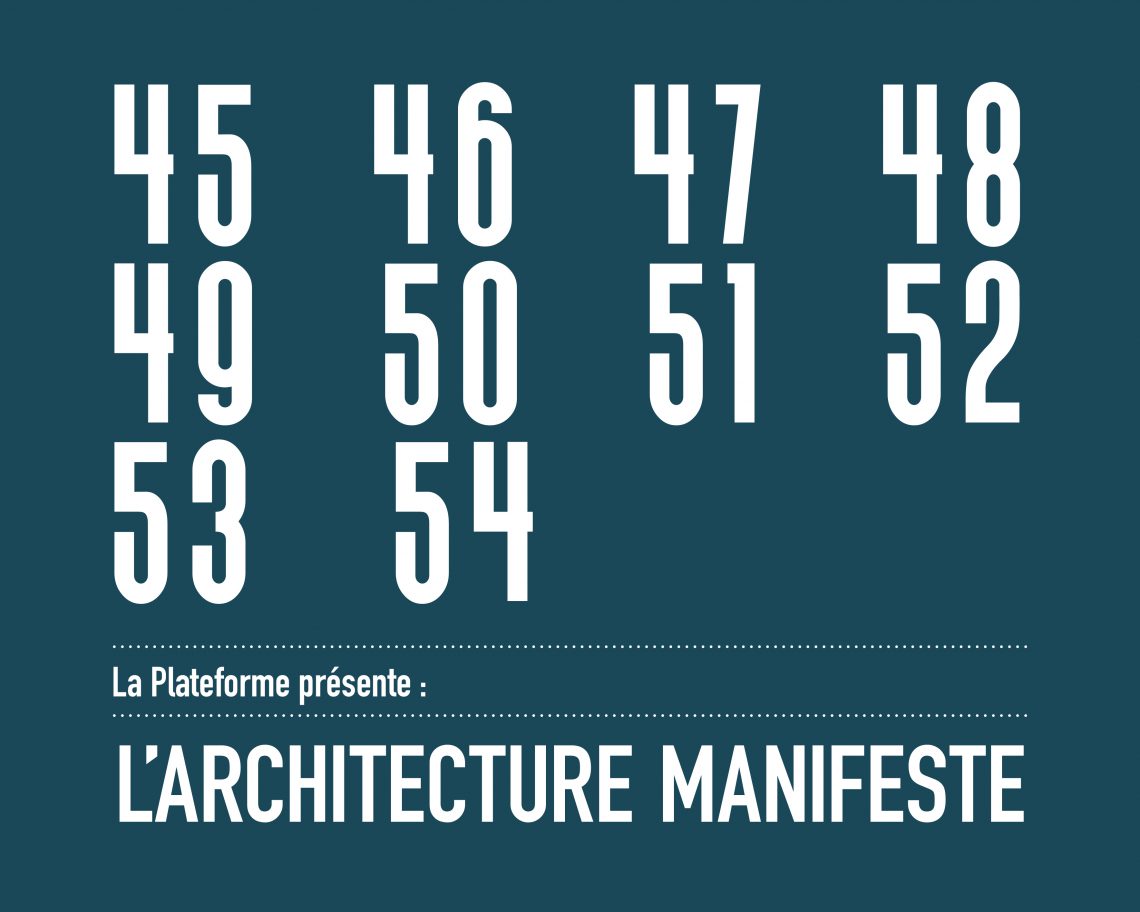 KAAN Architecten is among ten offices, collectives and groups that have been commissioned for the L’Architecture Manifeste exhibition, which aims to highlight the conceptual practices of today’s architects. The official opening will take place on Thursday, May 19, at 19:30 at the ENSA Bretagne in Rennes, while the exhibition remains on show until June 10.

The award ceremony for the BNA, rewarding clients and successful projects for society, took place at the Theatre Zuidplein in Rotterdam yesterday evening. 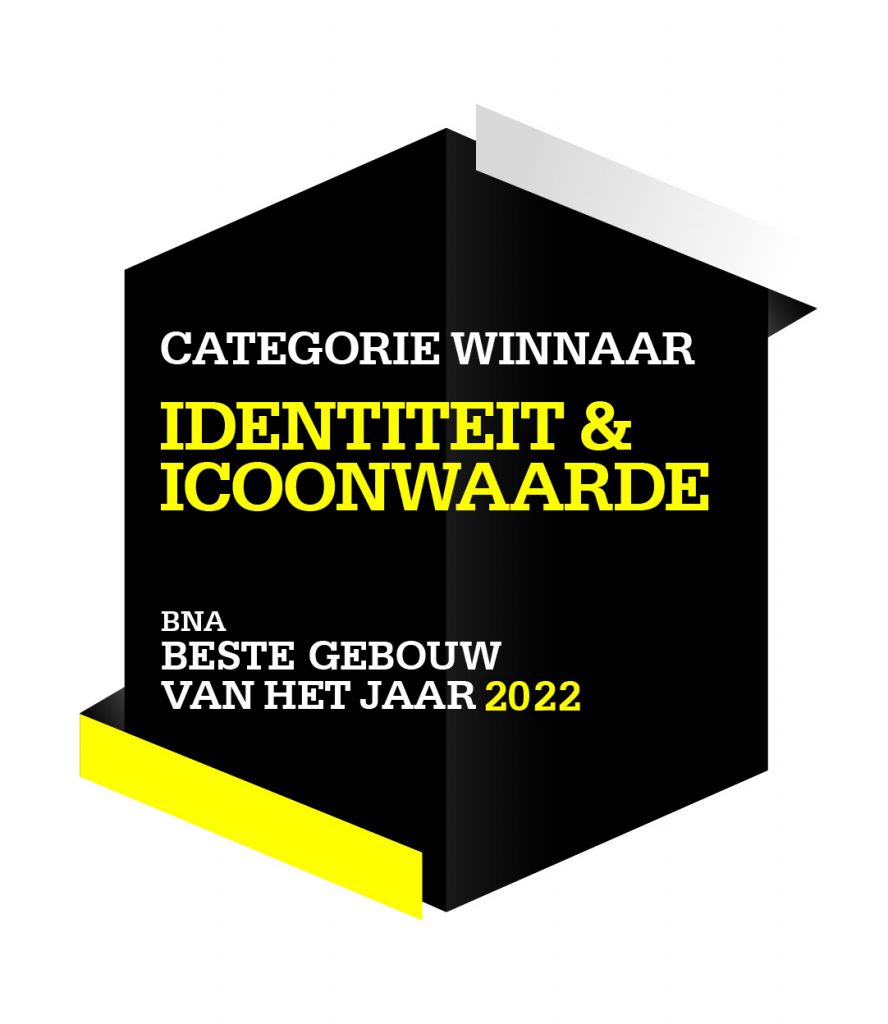 The jury, headed by Barbara Baarsma, recognized the social value of Courthouse Amsterdam: “Strict, respectable – humane. This building places the administration of justice where it belongs, at the center of society, and provides guidance during compelling moments when life-changing decisions are being taken.”. The jury was impressed by the powerful visual impact of the Courthouse “rather solemn from a distance, while very open and light once close by. The enormous scale of the building is additionally softened by the approachable sculpture on the front public square. The building ‘calls to order’ whilst embracing the visitors, with a generous natural stone square that invites you to step inside. 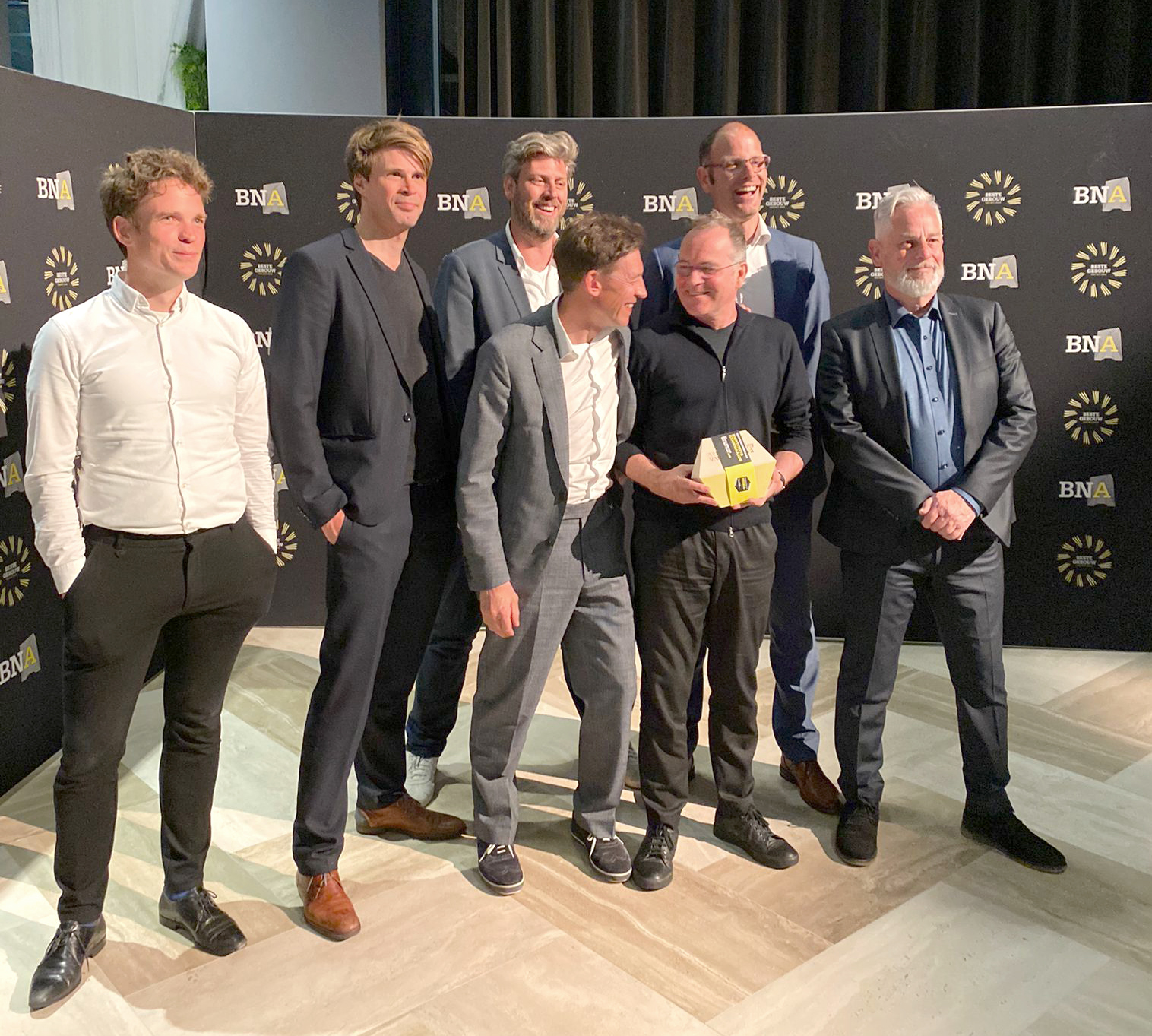 We’d like to congratulate and thank Rijksvastgoedbedrijf, who trusted consortium NACH and allowed us to develop a successful PPP (Public-Private Partnership) for this project. Congratulations to the whole NACH consortium as well, involving Macquarie Capital, ABT, DVP, KAAN Architecten, Heijmans and Facilicom. We finally would like to congratulate all the other winning offices: Bedaux de Brouwer Architecten, Olaf Gipser Architects, CULD Inbo vof and MVRDV.

To discover more about this award, you can read the full jury report and BNA Award press release.

The essence in making a choice is found in the source from ...

Kees Kaan will be giving a lecture at the TU Delft as ...

We take it for granted in Rotterdam, walking around in a city ...